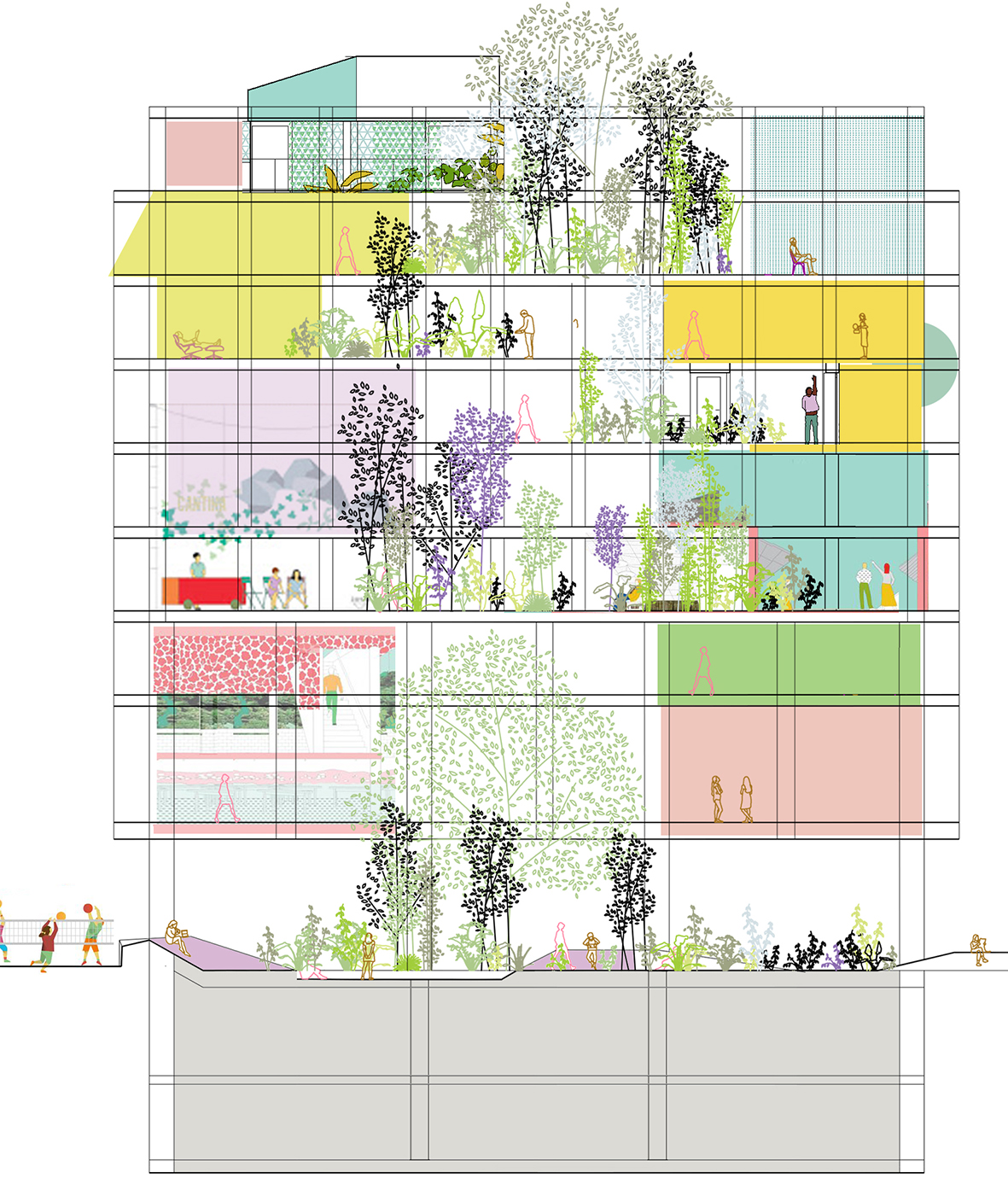 American cities are left with ghost buildings due to the new remote work conditions, dizzyingly accelerated by the COVID-19 pandemic, which has left office blocks empty. Downtown areas, landscapes of skyscrapers almost entirely dedicated to offices where the sun hardly reaches the deserted sidewalks, and also “suburban areas” with large buildings, like the Galleria in Houston, TX, are affected by this new “virus”.

There is an ongoing discussion in architectural forums about recovering the concept of cubicles—typical of Jacques Tatti’s offices—where each worker had an individual disconnected space within a larger open floor plan. When the only thing that makes sense is to reinvent and repurpose those spaces. The office building blocks can easily welcome collective housing, since dwelling is expected to be the only architecture needed in the post-pandemic era. The new housing configurations must incorporate qualities of flexibility, adaptability, mobility, even productivity, and should be ready for all kinds of catastrophes yet to come, including overpopulation.

A parallel phenomenon happened in some European countries when they were strongly affected by the bursting of the real estate bubble in 2008, as in Spain, where cityscape began to be filled with uninhabited buildings, mostly homes but also airports and even museums.

La Maceta was a project proposed—with a certain amount of irony and utopianism—to be part of the Spanish Pavilion for the Venice Architecture Biennale 2016. The concept aimed to reuse an abandoned housing development in Seseña, a municipality south of Madrid in Spain. The main strategy was to empty the interior of the blocks and inhabit the area just behind the facade, leaving room for the natural life to take over the center of the buildings, which would “restore” the dignity of “new ruin”: turn the outside in.

There is a “geography of ghost buildings” in Spain. Some of these skeletons with facade are called “the other Seseña”, in “honor” of the famous urbanization of the Pocero. The project proposes the reuse of these brick conglomerates, obsolete even before being inhabited, reusing their buildings as containers for a new, natural ecosystem.  The prototype “Maceta” (The Pot) is applicable to all types of constructions (including the most common office block).

The goal is to re-inhabit the facades of this ghost architecture, freeing the interior for a new natural ecosystem. The remains of the facades become the pots that will house the natural space of the future (which will provide the necessary oxygen for the survival of the human species). The individual should aspire to live with the smallest possible ecological footprint, and La Maceta system proposes “living with less space but with more environmental health.” The vegetation displaces the inhabitants to the spatial facades; the interior is filled with communal life, which reminds of the concept of famous “corralas” of Madrid.

The project is inspired by the romantic idea of the ruin, whose collapsed roof allows vegetation to take over the architecture from its entrails. That natural life is shown to the outside through its windows, as a view to a mysterious and insurmountable interior.

While in Europe we continually violate the soul of the buildings of our cities, conserving only their historical facades, like lifeless masks, now the façade is loaded with dignity and inhabited, turning into a stage for life to happen. The buildings will not contain pots—to Adolf Loos’s rejoicing—the buildings will be the pots.

The buildings will be perforated with thin metal tubular pillars, which will become structural staircases. The incisions will take place in pairs of two, separated 80 cm. This acupuncture action will take place at a variable distance from the facade, allowing the emptying of the interior of the building.

La Maceta prototype reuses buildings as a flowerpot for the natural ecosystem of the future, where perhaps new species will be predominant for the survival of the planet.

When Austin, TX finds itself unable to absorb the avalanche of tech-hipster nomads, moving en masse from Silicon Valley, Houston will be the next possible urban destination. This will open up many questions about the habitability of trendy neighborhoods and potential gentrification of others considered now problematic. A multi-node and zoning-free suburban city like Houston—“generic” as “a younger Koolhaas” used to say—will take on the arrival of these new young individuals eager for social interaction and outdoor activities. This will open up many unexplored possibilities and great opportunities for the reinvention of our city into a more habitable one.

Instead of the gentrification of communities or “block-ification” of neighborhoods, like Montrose in Houston, HABITABLE studio proposes to repurpose the “obsolete” office blocks and start a new lifestyle across the garden. Many of these buildings already have a central vertical empty core that could be opened to welcome natural light and ventilation, places to do sports and walk dogs, areas for social gathering, coffee shops to work, gardens and even small green houses, that ideally could create self-sufficient and healthier communities with the inclusion of circular economy.